Mosaic pizza oven masterpiece in SO16

Our clients, Aswita and Deb, contacted us in September 2019 after spending much of the earlier part of the year doing research on the best people to install and commission a small pizza oven in the corner of their home kitchen in Southampton whilst it was being completely renovated.

Having looked at various pizza oven alternatives, we were invited to present our portfolio and come up with a project plan and costing based on some ideas they had seen online but based around our small F700 ‘Le Marmiton’ brick oven because of the restrictions on space.

The 700 is our smallest brick oven but because of its compact size heats up very quickly to 500C in under an hour. See it here in our domestic oven range. Once insulated, rendered and tiled the F700 would be the perfect mosaic pizza oven.

Working through a number of project cgi’s based on those ideas, we finally settled on a plan of action to coincide with the renovation of the house and kitchen that had already started later that month.

Our initial schedule had to be radically changed after it was discovered that the kitchen units and worktops weren’t going to be on site until much later on in the renovations and we weren’t going to have a worktop to build from.

Initially we had thought that getting the flue out through the side wall was going to be easier but following discussions of the flue design with our HETAS consultants, we decided to change the direction.

There was a dead space in the roof to one end of a bedroom above so we then took the flue straight up, through the ceiling and dead space and out through the roof.

The old flue position was bricked up leaving it ready for the plasterer to tidy up for the decorators.

The new position meant we complied with HETAS recommendations of only having two 45 degree bends in the whole installation before having a straight run up. The clients were having a dormer window relocated in the bedroom above so we had to make sure the new flue terminated at least 1 metre above the level of the window to meet regulations.

Having got the flue set in the correct position we could then get on with applying a vermiculite cement (vermex) render over the oven as a solid insulated base for the tiling. The top straight section had to be plastered with bonding plaster over an insulated mesh as the vermex would have been difficult to apply to a vertical surface.

We took the opportunity to slow dry the oven at this stage as it helped cure the render and dry the body of the oven out enough to fire up properly.

After a few small fires we could safely commission the oven and hand it over ready for tiling.

The tiling company were already on site doing work on the bathrooms, kitchen floor and feature wall in the dining room so we agreed that they were the best people to tile the oven given the circumstances. Each strip of mosaic had to be cut from the sheet as there were so many curves and angles to deal with, so they had to run individual strips of mosaic right round the oven before applying the next strip.

Working their way up and round keeping each band equally spaced took a long time but when we finally came back just before Christmas, the tiling was almost done and looked fantastic.

We finally handed over the oven by doing a pizza making and baking demonstration at a Christmas party for twenty or so people. Our mosaic pizza oven masterpiece is now being used enthusiastically by our clients and being indoors rather than out, it means they can cook all cuisines in all weathers!

As of Christmas 2019, the client is still waiting for the granite worktops to be fitted and kitchen signed off but once installed the cool stone will be an excellent base for making pizza dough and with our specialist input, the client is on her way to being another first class pizza maker! 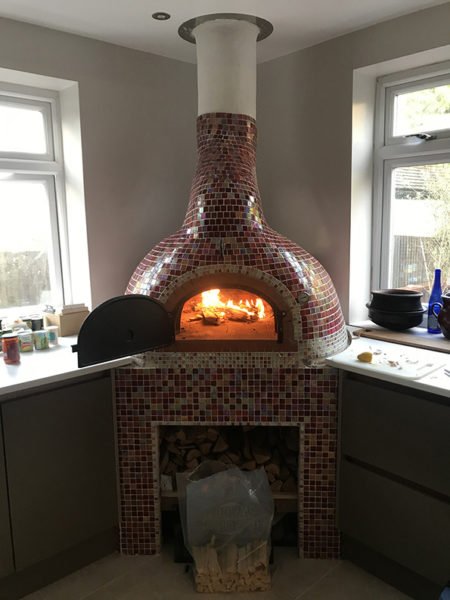 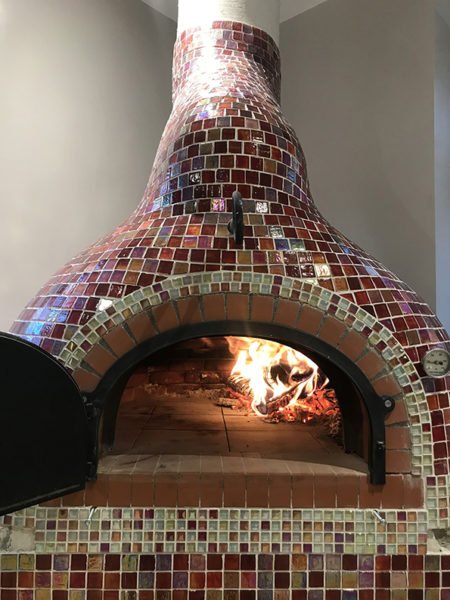 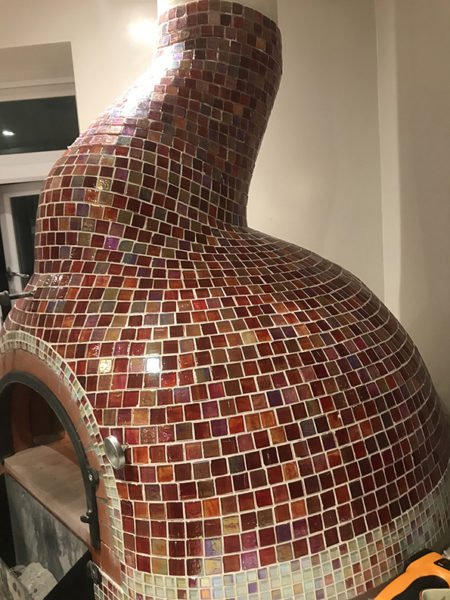 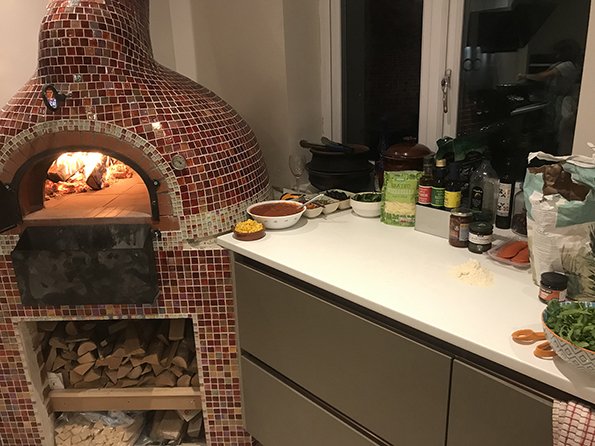 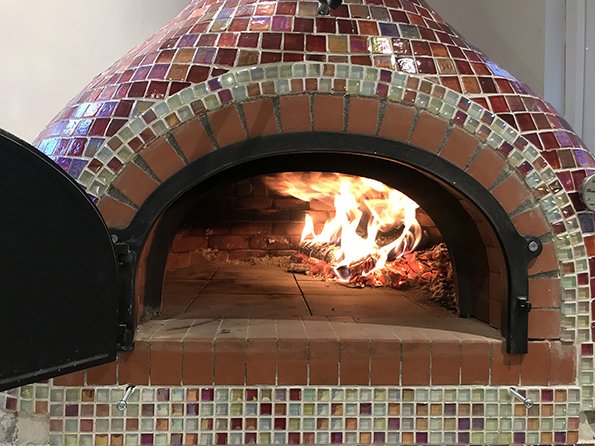 Mosaic pizza oven Our clients, Aswita and Deb, contacted us in September 2019 after spending much of the earlier part of the year doing research on the best people to install and commission a small pizza oven in the corner of their home kitchen in Southampton whilst it was being completely renovated.   Having looked […]