It isn’t everyday you get to stay in a luxury hotel with no paying guests and a deserted kitchen but that is exactly what happened when we took on this project just as London and surrounding counties were going into tier 4 COVID restrictions in December 2020.

Oakley Court Hotel is a C19th Gothic pile of a hotel situated on the banks of the Thames between Windsor and Bray, adjacent to the world famous Bray film studios. It has gone through various incarnations over its long history- home, hotel, film set and now back to a hotel and conference venue. It is famously associated with Hammer Horror films but has been used in scenes from The Piano, The Rocky Horror Picture show and of course the original St Trinians film.

Some films shot at Oakley Court- 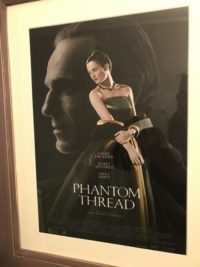 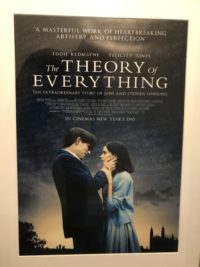 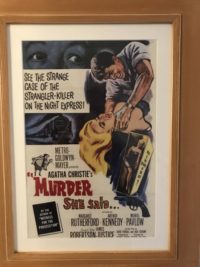 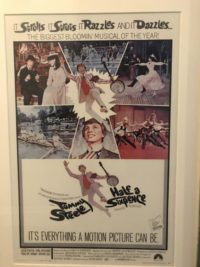 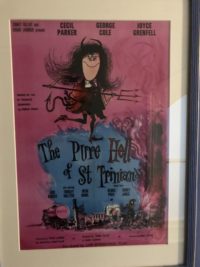 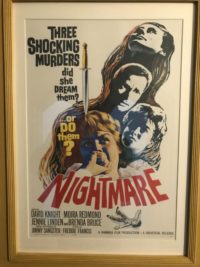 Will Hemming, ex head chef at Simpsons on the Strand in Londons West End asked us to look at a couple of projects he had in mind for the hotel. One was a pizza oven for the main kitchen and the other a new outdoor kitchen area for guests dining al fresco on the extensive terraces and lawns running down to the riverbank.

Having surveyed the main kitchen when it was fully open, we were a bit nervous of working in such a hot and manically busy area when oven installation is not only messy but also dusty. As it turned out, we needed not to have worried as the kitchen was closed and chefs on furlough during the 2nd full lockdown in December with only two chefs on duty to cook for the skeleton staff keeping the place ticking over until it could reopen again.

The staff couldn’t have been more helpful, inviting us to not only use rooms to stay over in but virtually giving us the run of the place during our working week, enabling us to wander the corridors, tour the gardens, put our feet up in front of the fire of an evening and read books from the extensive library that had been newly restored.

The Oakley Court Hotel bedrooms were very comfortable ( as you would expect!), food was laid on by the two duty chefs and drinks were on tap in the main kitchen- what was there not to like, except no alcohol as the bar and cellar were closed.

We eventually started on site during the week before Christmas 2020 and finished and handed over on Christmas eve leaving the chefs to play around and commission the oven in their own time.

We should be going back at some point to develop the outdoor kitchen area further with a new larger pizza oven and possibly some other cooking appliances but as of January 202, lockdown has meant little progress can be made until face to face discussions can be agreed on site.

Well here we are again, invited back not quite for the outdoor kitchen we were expecting but a new large rotating hearth 1400 oven from our partners Four Grand-Mere. We were contacted in March 2022 to quote to supply an oven for a new area the hotel were developing adjacent to the Walled garden just along the river from the hotel. The Walled garden terrace is a separate area with a huge marquee for eating under cover and seating outside running down to the river and has its own kitchen and menu and special arrangement for Soho House members. After some discussion, we settled on a high output rotating hearth wood fired oven 140cm in diameter with a separate area for burning the logs so the hearth is completely clear for cooking. We came to install during May with the hotel, despite being almost fully booked, giving us rooms to stay and food throughout the day and night.

The area had been decked with scaffold boards but needed strengthening to take the weight of the oven, especially where the legs sat on the wood. We lifted some boards and cast concrete blocks underneath to spread the load and then relaid the boards on top. The oven is now up and running and supplying pizza and flat breads to the large number of people who use the hotel as an events venue or meeting clients on business. A big thank you to the chefs and staff who looked after us once again. 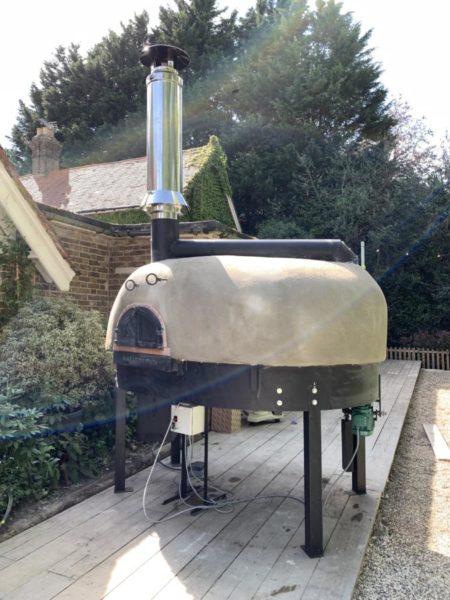 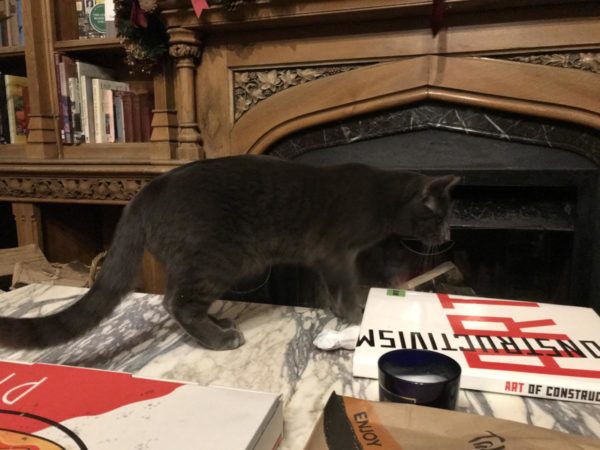 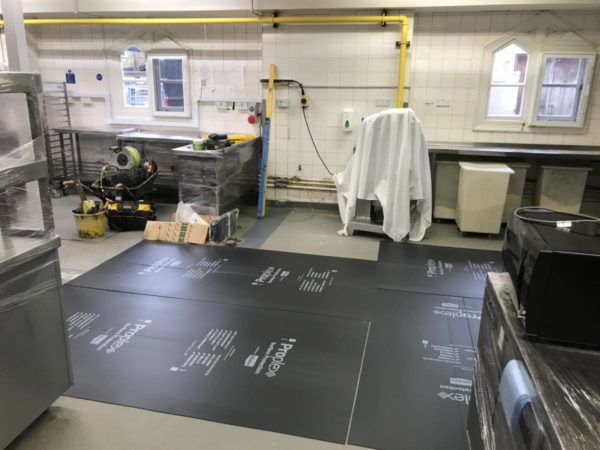 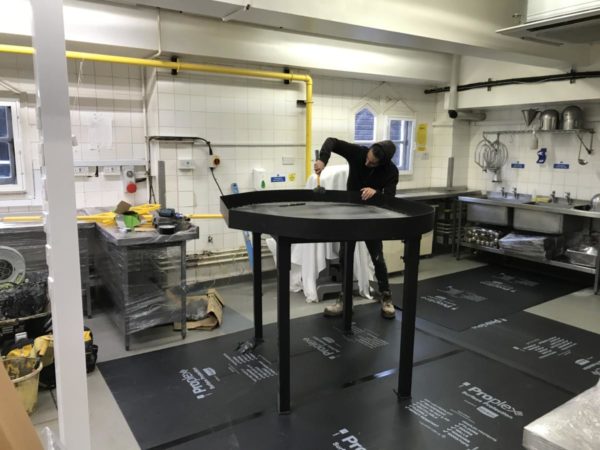 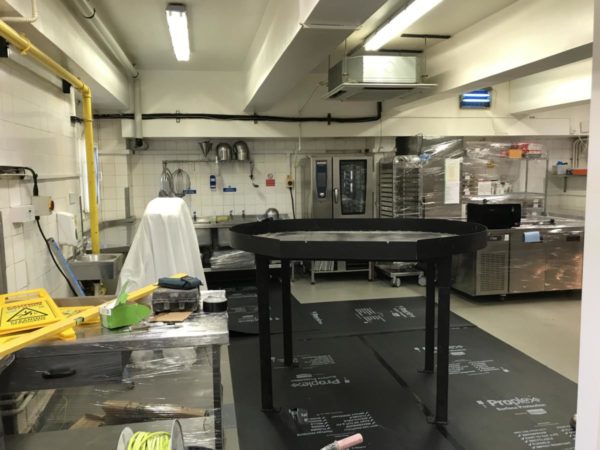 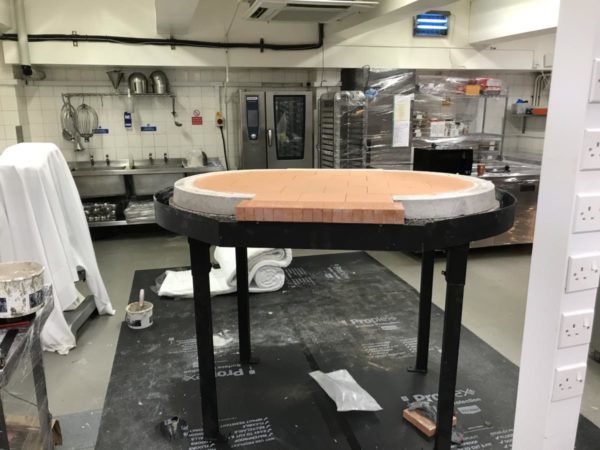 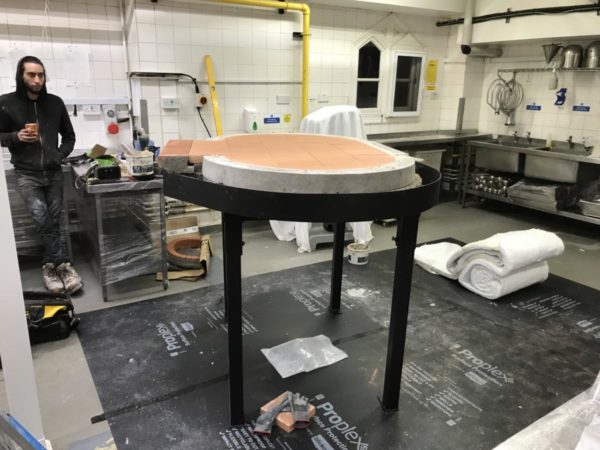 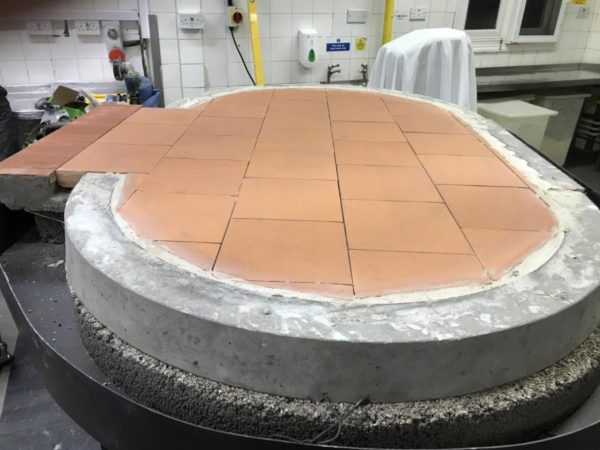 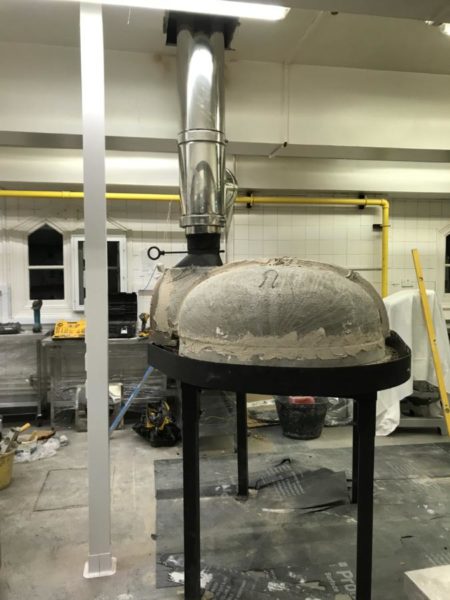 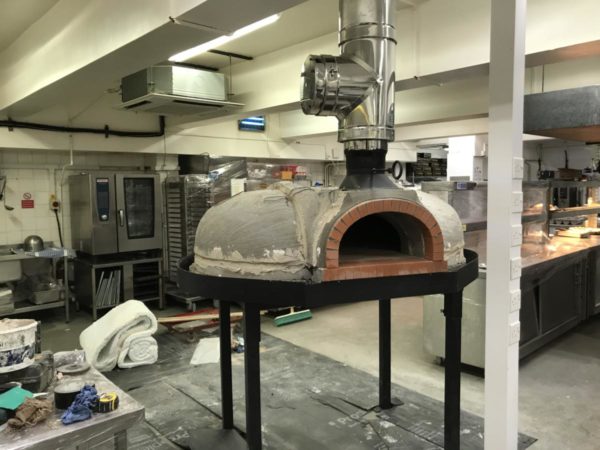 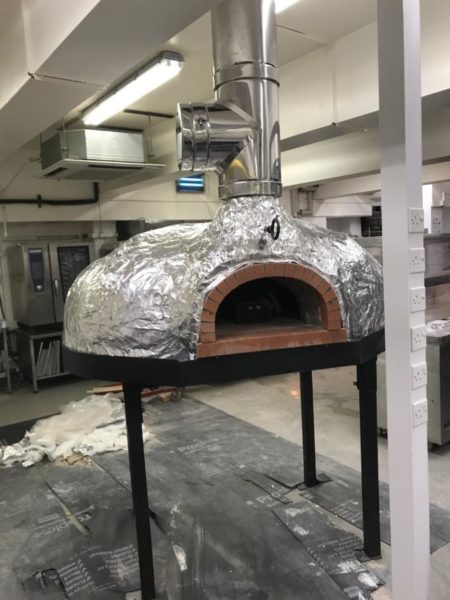 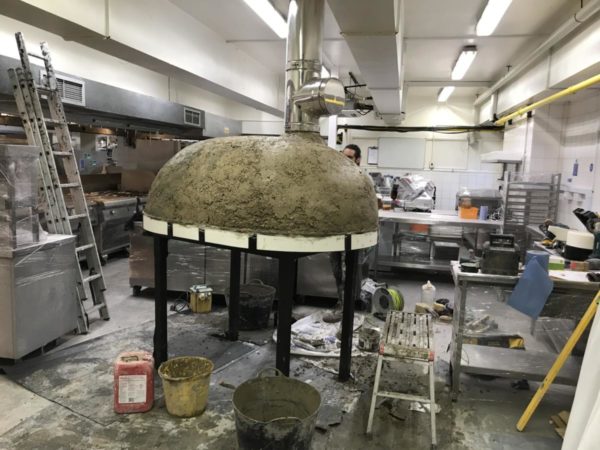 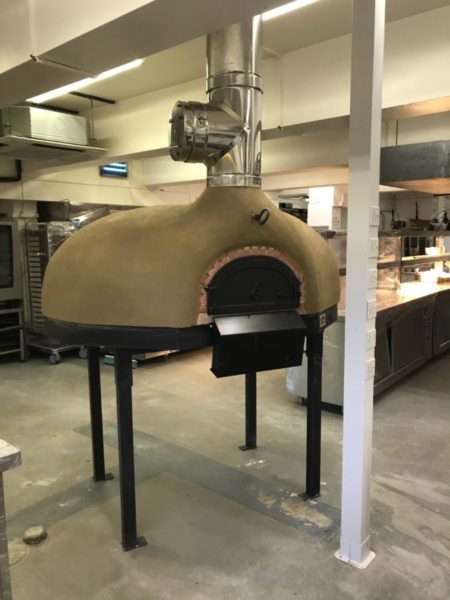 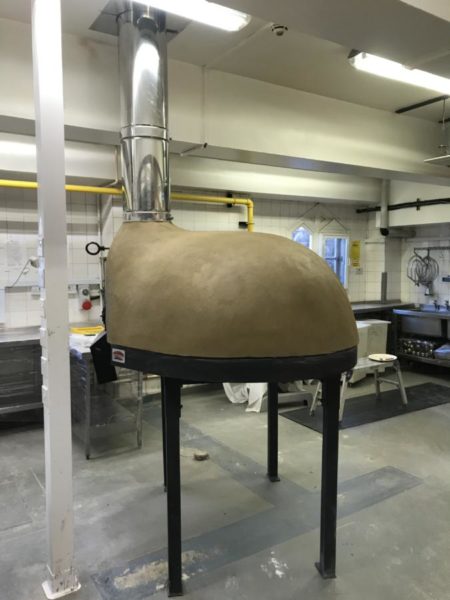 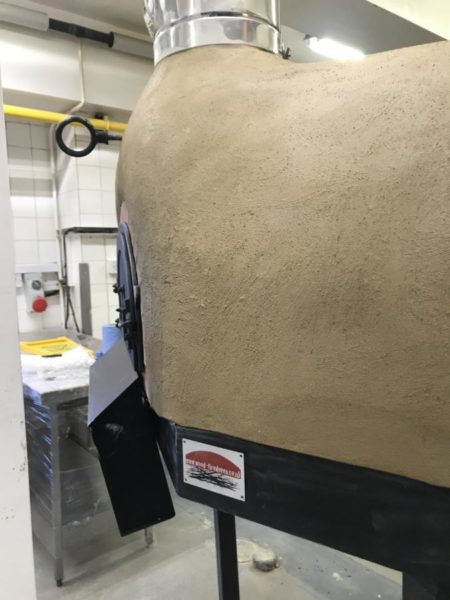 close up with our label 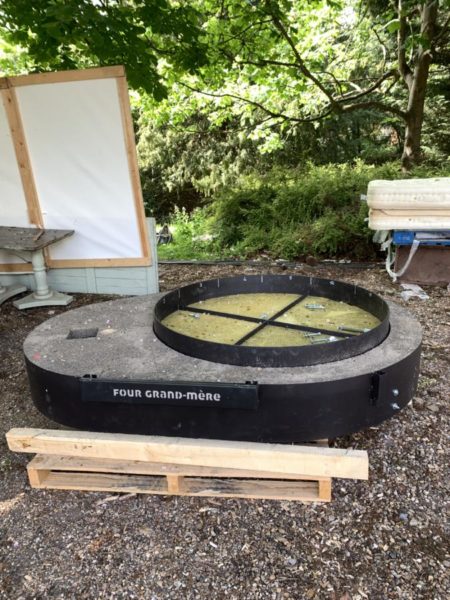 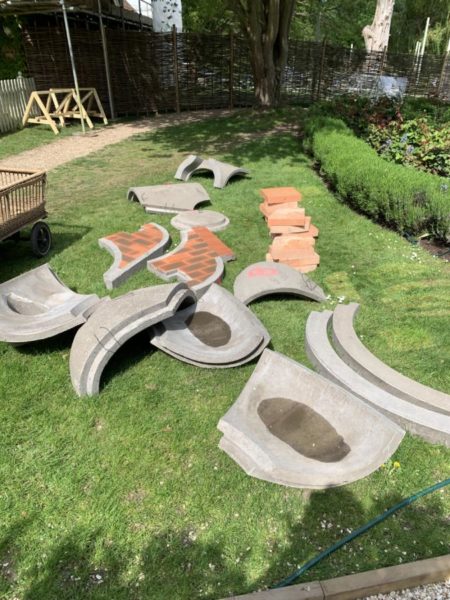 hearth and dome sections laid out 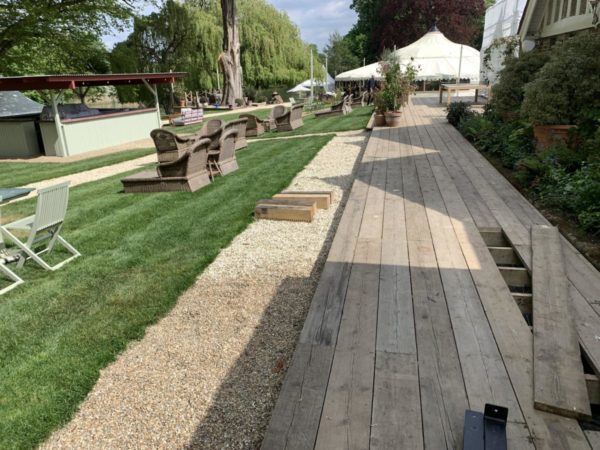 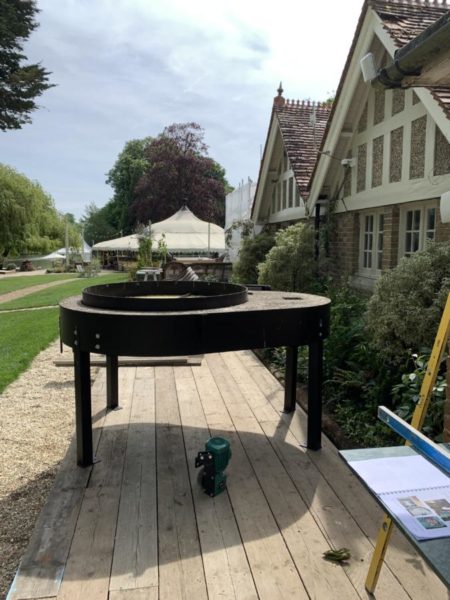 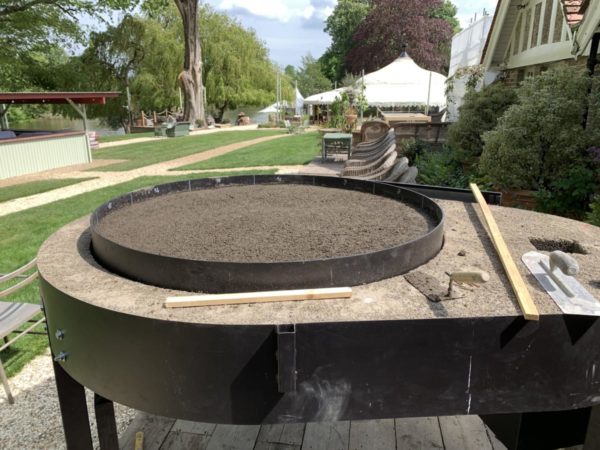 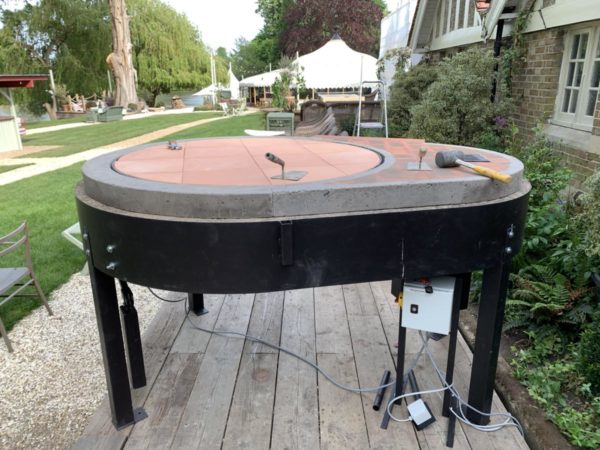 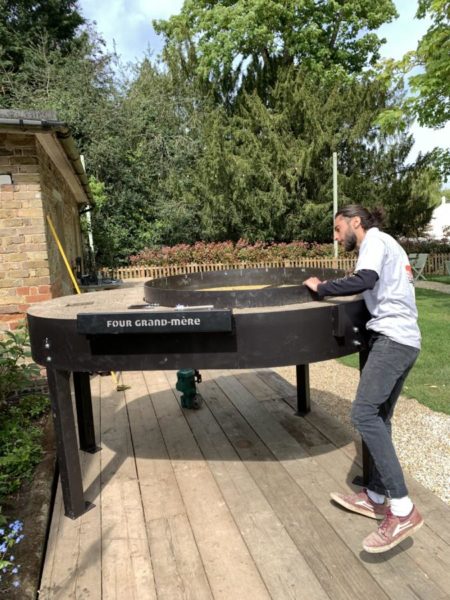 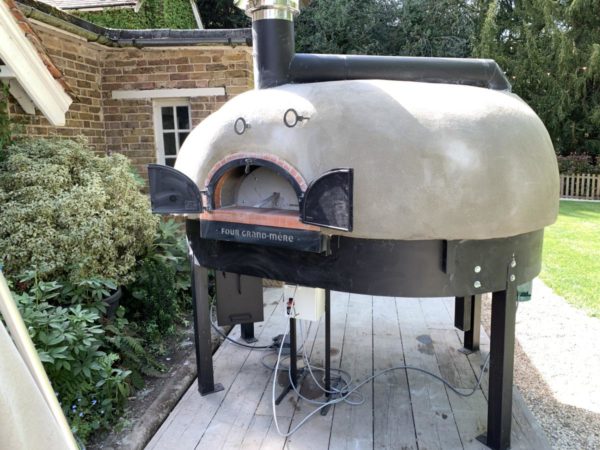 Oakley Court Hotel- Gothic luxury with pizza oven! It isn’t everyday you get to stay in a luxury hotel with no paying guests and a deserted kitchen but that is exactly what happened when we took on this project just as London and surrounding counties were going into tier 4 COVID restrictions in December 2020. […]